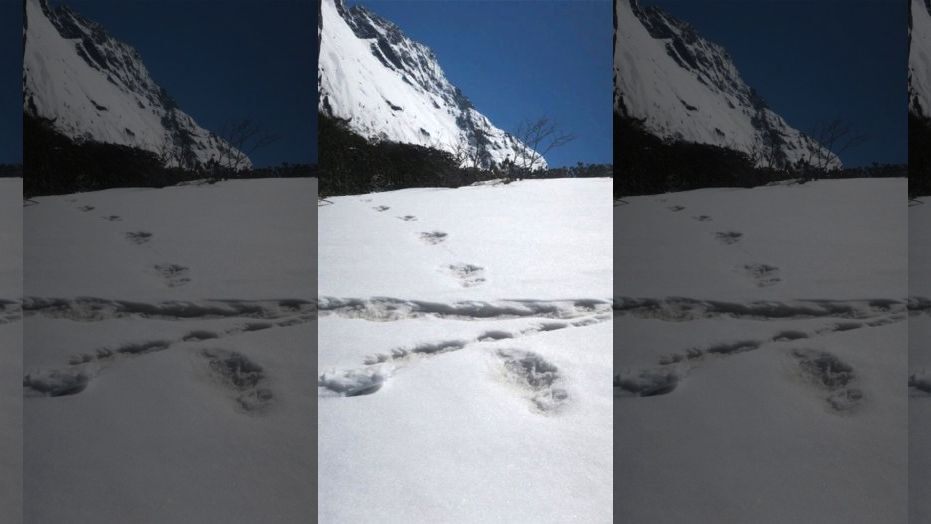 Yeti are real, and they’re on the move — at least according to the Indian army, which said Monday that its mountaineering expedition team stumbled upon a set of “mysterious footprints” in Nepal this month.
No, we are not confirming that this elusive snowman actually exists. But while the prints might be a fraud, the report seems to be real.
The army tweeted from its official account Monday that an expedition team had come across “Mysterious Footprints of mythical beast ‘yeti’ measuring 32×15 inches close to Makalu Base Camp on 09 April 2019.” The post included several photos.
True believers on Twitter congratulated the army. But, by and large, the Internet wasn’t having it, and many of the army’s 6 million followers were less than impressed.
 Large footprints in the snow, sighted by the Indian army near the Makalu Base Camp in the northeast Himalayas, are measured April 9. (Indian army/AFP) (Handout/AFP/Getty Images)
Many questions were hurled. Scorn was heaped. And there was the (understandable) skepticism about the mythical yeti (also known as the “abominable snowman”), which lore describes as a giant apelike creature living in the Himalayas.
Some Twitter users were particularly harsh in their disparagement.
“Couldn’t you guys call a single animal expert before posting this?” one person wrote.
Others were simply confused, asking: “Is this some prank?”
The detail that most undercut the army’s claim was that the footprint photos seemed to suggest that the alleged yeti is one-legged, which skeptics were quick to point out.

One asked whether the beast “travels by jumping.”
There were many comical comparisons to “The Adventures of Tintin.”
“I always knew Tintin was right. He was the first to spot the mysterious beast yeti,” one user tweeted.
Some were more measured in their response, debunking the claim and occasionally offering alternative, more realistic explanations — perhaps the footprints were from a snowshoer, for example.
The army’s response to the social media frenzy? It confirmed that “the videos and photographic evidence” had been “handed over to subject matter experts.” Still, it said it wanted to publicly share the news to “excite scientific temper and rekindle the interest,” BBC reported.

In 2013, a group of researchers analyzed hair allegedly from the mythical beasts. As The Washington Post reported at the time, the study suggested a match with a Paleolithic polar bear, which might mean that “it was a living hybrid between this ancient bear and another species, one strange enough to inspire myths in the locals who spotted it.”

These findings have since been called into question, with other researchers saying the hair came from a “rare subgroup of brown bear found in the Himalayas.”
Mountain Institute founder Daniel C. Taylor, who has studied yeti lore for years, also has suggested that “yeti” footprints are attributable to Asiatic black bears.
A 2017, study of bone and fur samples attributed to yetis showed they were from brown or black bears.
Makalu Barun National Park has traditionally been the spot for yeti footprint sightings. But an official in the Indian army said this is the first time that “footprints in such large numbers have been sighted” by an army mountaineering expedition team.
The team plans to climb Mount Makalu, which at about 28,000 feet is the fifth-tallest mountain in the world, in May.

Ban on azhar at last

Encounter With The Lion